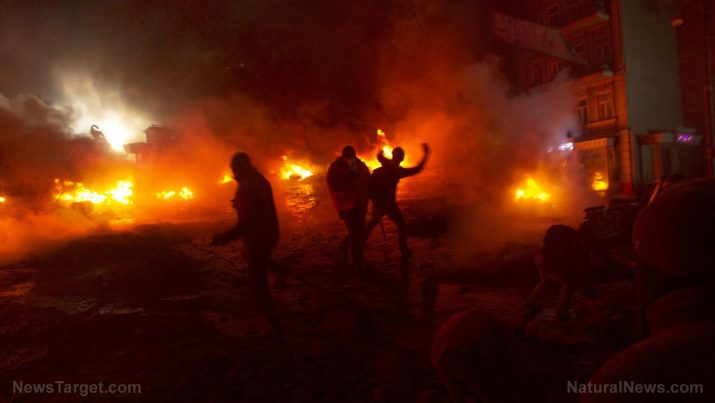 It’s not an exaggeration to say that battle lines are being drawn in America today. You can see it in the news everyday. As time goes on, people in this country are becoming very tribal, as Americans of different races, religions, and political persuasions turn on each other. What we saw in Charlottesville last weekend was just the latest sign that America is turning into a very dark place, where conflict between different demographics is the norm. And it probably won’t be the last indicator to emerge.

So how did we get to this place? How did we reach a point where America resembles Wiemar Germany, with white nationalists and socialist thugs battling it out on the streets and killing people?

If I were to pick one culprit for this mess, it would be the mainstream media. They’re the ones who have, for the most part, stood behind leftist ideologues for decades, and allowed them to bury public discourse under a wave of identity politics. They are at the very least, partly to blame. They’ve helped stoke divisions in this country that were once faint, or in the process of healing.

And if you don’t think the mainstream media is responsible for nudging our country towards war in the streets, then you should read this op-ed that was recently published by the Washington Post. It was written by N.D.B. Collins, an associate professor at Johns Hopkins University. In it, he appears to shamelessly call for the left to spawn more riots and violence in this country.

The white nationalist riot in Charlottesville, a city that boasts “diversity makes us stronger,” made a lot of things clear. One of them is that generic solutions to the racial problem — bland affirmations of inclusiveness, tolerance and “free speech” — will no longer work. Indeed, they have never worked, at least not on their own. …

[I]n April 1968, amid a flurry of other “rocks,” riots shook American cities following the assassination of Martin Luther King Jr. It took that rolling unrest, not the promise of further economic growth, to spur President Lyndon Johnson and Congress to action. Within a week they had passed the Fair Housing Act.

Over the past century, liberalism, vexed by an ever-sharp, ever-cutting white supremacy, has needed these rocks. …

Segregationists have again assumed their pedestals in the Justice Department, the White House and many other American temples. Paper alone won’t drive them out. Start throwing rocks.

Let that sink in. At a time when our country has never been so divided, and the proverbial smoke is still clearing from a deadly riot in Virginia, one of the most widely recognized news sources decides to post an article that calls for more rioting.

It looks an awful lot like the media is trying to foment a war on American soil. What other conclusion can you draw from this very public call to violence? They had to have vetted this piece and understood its meaning and intent, before unleashing it on the world. They have to know the consequences of that, and if they know those consequences, then we can infer their goals.

The mainstream media has just shown us all its true colors. They’ve finally revealed what many of us suspected for a long time. They appear to be trying to convince Americans that it’s okay to hurt, and possibly kill each other for political reasons.